I found this character sheet while looking through the storage container that has all of my old D&D stuff in it.  There are also some old dungeons that I wrote back then in there that I'll probably post at some point and may even publish for real if it's a worthy project.  Anyway, this is my 19th level Wizard Elroy that I played in the Monty Hall game I was in back then when I was a teenager sometime around 1980 or before: 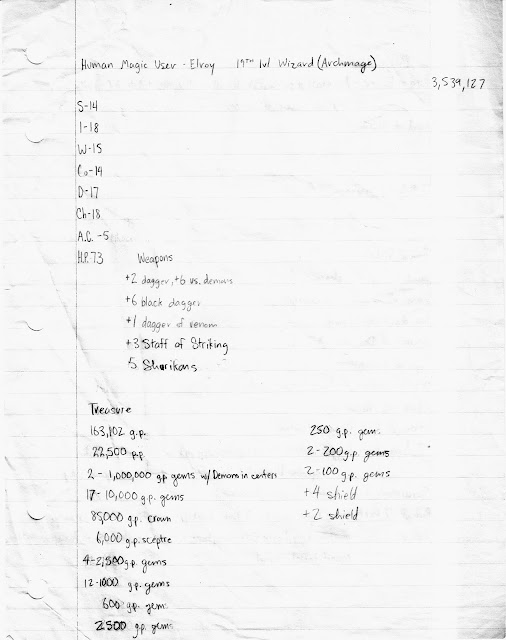 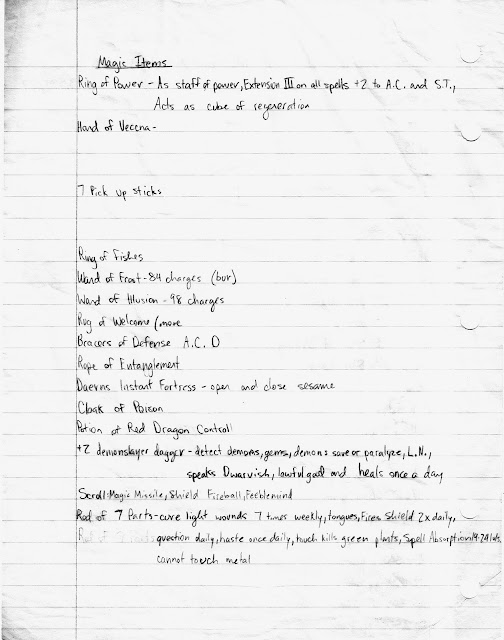 I elaborated on this a little in this post:

A few things I have observed and recall about how we played back then from looking at the character sheet:

1.  I can't believe all of the magic items and treasure he's carrying around with him - its obvious that we didn't care about encumbrance back then.  I remember bags of holding getting a lot of use but Elroy didn't have one.  He also has what amounts to a dragon's hoard worth of gold and platinum pieces which one can only assume he has stashed away in his stronghold or something because he certainly isn't carrying it all.

2.  The amount of incredibly powerful magic items he has in his possession is staggering.  Several artifacts and several really powerful items can only be explained by the fact that it was a Monty Hall game and we went down into a 20 level deep dungeon and killed Demogorgon at the bottom where we found some of the artifacts and the 1,000,000 gold piece gems and crown.

3.  Yes, you heard that right, not one but two 1,000,000 g.p. gems each with a demon trapped inside and a crown worth 85,000 gold pieces!  This can only be explained by the Monty Hall nature of the dungeon and the fact that once you are that high of a level this is probably the only way you are going to level up - its certainly not going to happen by killing kobolds!  Keep in mind that these items were in Demogorgon's treasure horde so its not like we just found them laying around - we had to kill the Prince of Demons to get this stuff!  And behind door #1 Monty is this beautiful 85,000 g.p. crown!

5.  He has 73 hits!  I'm not sure how he got this many unless either we were using Basic D&D for the +1 CON bonus per level with a 14 CON and we didn't stick with hit point limitations for higher level characters (thru 9th Level per Rules Cyclopedia).  If he rolled 2.5 hits average each die +1 hit point per level for CON that comes out to 66.5 hits (average).  So if this is what we did then 73 hits is plausible and only a little above average.

If we were using 1st Edition AD&D he would have had to have rolled fours on just about every roll without hit dice limitations for higher level characters since there is no CON bonus to hit points in the AD&D PHB for a 14 CON.  So either I fudged the numbers or we were playing Basic D&D and weren't playing with reduced hit dice at higher levels.

6.  No pre-generated character sheets here - we just used a piece of paper and rolled with it.  Remember this was somewhere around 1980 (maybe earlier) and there was no internet and you had to buy the character sheets just to Xerox them.  If you are a kid with a limited budget why bother...

7.  His stats are pretty darned good.  I'm not sure if they got bumped through play (wishes, tomes of whatever or other magical effects) or he got rolled up this way but I actually didn't roll this guy up, he was inherited at first level on the first level of the dungeon so I can't say for sure.

8.  Rather than selling all of the non coin treasure that we found and dividing up the total which is what we do now, we just handed out the spoils as fairly as we thought possible and didn't worry about it if one guy got more g.p. worth of stuff than the other.  This explains why he has all of the elaborate gems and jewelry written out on his sheet rather than just a pile of cash.  Again, one can assume that most of this stuff is piled up in his keep somewhere.  That's a dungeon that's just screaming to be written up at some point (Elroy's Tower) and I even started it back then but never finished it.

9.  I guess the two magical shields were just excess loot to give to my hirelings or something.

Not every game we played in back then was this Monty Hall but I do remember that there were magic items a plenty in most games and that plenty of characters died.  Elroy even died once on one of the upper to middle levels of the twenty level dungeon he was adventuring in when he foolishly put on a Necklace of Strangulation without casting Identify on it first.  The other party members boiled the flesh off of his bones in a massive cauldron located somewhere in the dungeon to remove the necklace and then had him resurrected and he returned to the land of the living to complete the massive dungeon crawl!
Posted by Dan at 5:46 PM