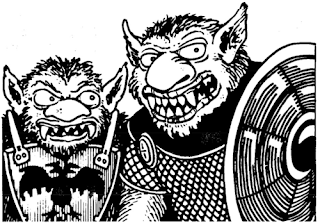 The Brotherhood of the Black Crowes returned to the scene of the previous action with fresh reinforcements tasked with avenging their fallen comrades and recovering their bodies if possible. This time, knowing that there was the possibility of being hit from two sides again, Lorinar cast Stinking Cloud on the tunnel to the right to keep the Bugbears on that side from attacking (the duration of that spell is semi permanent meaning it lasts for 24 hours per our house rules) while we raided the chambers down the left hand branch of the tunnels. No sooner had he cast it than two Bugbears appeared seemingly out of nowhere and surprised the group. A brief struggle ensued and they were overcome in short order.

We went down to the room on the left and it was empty so we went up the stairs since that's where the leader that we killed came from last time we were here, and was the most likely location of the good loot. There was a door on the left and a passage straight ahead.  The monk listened and heard Bugbears whispering so we decided to open the door. Before we could though, the bugbears on the other side opened it instead and surprised us again! A fierce combat ensued between the new bugbear leader and his two female cohorts and they were finally overcome after an epic struggle. We looted the room and went down the hallway and found a storage room with lines of catnip laid out on a table that turned out to be a Thugee (Norse) shield that we later determined was magical. We bagged up the catnip for further use since it appeared to be a favorite of bugbears, grabbed the shield and a cask of oil and left the other foodstuffs there to be retrieved later. 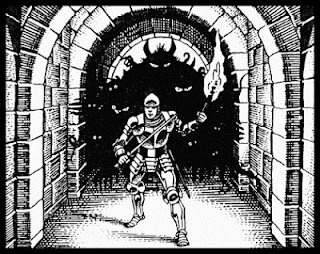 Lorinar also found a secret door in the room that led into a natural cavern that branched into three separate tunnels that led out of it.  In the room were three giant fire beetles that attacked the group! When the group entered the room to attack them, we got a dizzy feeling so Lorinar, Ragnar and our new sea elf warrior ally Narsil backtracked to the secret door and discovered that the effect went away when you left the room - the cavern was enchanted with some sort of disorienting magical effect!  The others defeated the Fire Beatles in melee combat and then couldn't figure out which way was the way back to the secret door since they were disoriented!  Some guessed correctly but the others did not and started blundering further into the maze.  Since we were out of healing spells we decided not to risk exploring these tunnels any further since we could get lost in there for some time with no way to heal ourselves in the event that we needed healing magics. 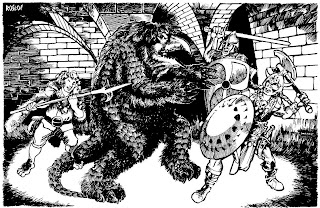 So we went back out of the Bugbear lair and back into the cave below that smelled of death. There were bodies of dead adventurers and humanoids everywhere that appeared to have been killed by some sort of large predator. We searched the bodies and found a small amount of coinage but were attacked by a group of giant rats that were quickly dispatched. The monk listened and heard the sound of some large creature snoring and obviously asleep. Our new wizard Abscondias Akbar commanded his Figurine of Wondrous Power to turn into its owl form and we sent it in to scout ahead. It discovered a sleeping Owl Bear in a chamber at the end of one of the passages and we decided to let sleeping owlbears lie and headed back to the keep to rest up and recover spells. 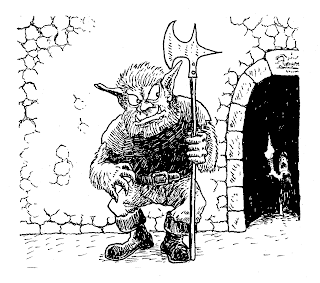 The next day we returned to the caves and the Bugbear lair right before the affect of the Stinking Cloud wore off. When it was gone we went down the hallway which led to a "T" intersection and turned right down a staircase. Below were six bugbears with spears (the ones we had fought before that killed Illundria) and our vengeance was at hand! Two of the wizards cast sleep and five of the six bugbears and our new Paladin Sierra dropped to the floor. We awoke Sierra and killed the remaining bugbear and found some keys and coinage on their bodies. The keys opened up the doors to two prison cells further down the hallways in both directions. The first contained a number of humanoids including a large Bugbear that swore he would help us to defeat the other Bugbears and not attack us (this was verified with Amul's Scroll of Truth). The other prisoner we released was a very strong wildman fighter who appeared to be crazy. He was very intent on getting into "some killing" and the paladin noticed that he had an evil aura about him! He proceeded to arm and armor himself from the fallen Bugbear's weapons and armor and went up the stairs urging us to go kill the remaining bugbears. Meanwhile, we found two more humans in the other cell along with more humanoids. We released the humanoids and freed the humans who vowed to fight for us and said they were former adventurers who had been captured. The wildman at the top of the stair was urging us forward before we could equip the two humans.  Finally, our Thugee cleric Skjeorn had had enough of his ranting and cast hold person on him and we disarmed him and returned him to his cell - he was evil after all and couldn't be trusted. 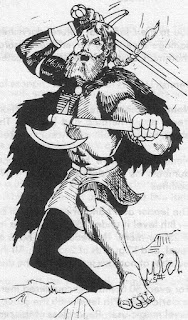 We went back up the stairs with our new henchmen and down the last remaining passageway where we encountered a large number of Bugbears including females and young that appeared to be imminently hostile, so two of the wizards cast sleep and knocked them all out and it was over - the Bugbear lair had been defeated and our fallen comrades had been avenged! So having successfully completed our mission (though we never found the bodies) we left the Bugbear lair and pondered our next move.  Since we hadn't really been injured too badly, and had most of our healing spells we decided to either enter the enchanted caverns or return to the Owl Bear's lair in search of more loot!

A brief note - despite it being Friday the 13th, our luck was normal in this game. We won roughly half of our initiative rolls and were only surprised by the bugbears roughly half of the time. This made a huge impact on the final outcome of the session and contributed to our successful foray.  During the previous fight with the Bugbears, not only were we surprised on the initial encounter, we never won initiative (lost 5 in a row) and only tied twice after that and half of the group was wiped out.