Averlorn Campaign: G2 Into the Lair of the Frost Giant Jarl

Once the group had returned to the city of Medea’s Gate, we took a week off for a nice long rest and sold some of our treasure and exchanged the rest for more portable gems.  Then we saw to our provisions and more importantly, bought every healing potion we could find in town since we were going through them like water fighting against the giants.  Once we were ready, we boarded the airships again and returned to the snow capped mountains for a follow-up raid on the Glacial Rift of the Frost Giant Jarl in order to complete our mission – to return the magical tome to its rightful owners in the Surgeon’s Guild.  When we arrived, the ranger led us to our ice cave hideout and base where we spent the night and prepared for our next raid.  The following morning, we left for the Rift of the Frost Giants once again.
Rather than risking another ambush on the ice ledges on either side of the entrance to the rift, we decided to use our knowledge of the place from our previous forays to our advantage.  Asclepius cast his fly spell on himself and he proceeded to ferry us one by one through the air over the rift floor to the ledge outside of the cave where we fought the Fire Giants previously.  We decided to go in from this ledge because it was a place that our opponents wouldn’t be expecting us to enter since it bypassed the primary entrances on either side.  Once we were all on the ledge we went in to the former den of the Fire Giants and found it to be completely empty – even the bodies of the three dead giants were gone.  Gone as well was the Wall of Stone that Teth-en-Aire had cast over the entrance to keep the Frost Giants out.  Apparently, the Frost Giants had been busy cleaning the place up during the week that we were gone.  At this point things were going as planned since we managed to gain entrance to the complex without raising the alarm. 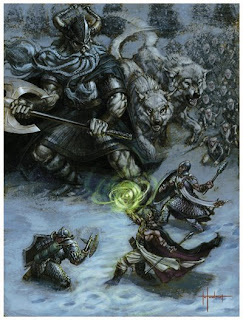 We went into the hallway towards the guard cave where we had been ambushed previously and immediately started getting hit in the hallway again by boulders from the guard post.  Rather than hesitating or trying to take cover, Lucias, Taleth and Bellinorn charged the two Frost Giants in the room to put a stop to their dangerous missile throwing as quickly as possible.  These same giants, or others like them, had hurt us badly with thrown boulders from this location on a previous foray so we were determined to close with them as quickly as possible so they couldn’t do that again.  Once the fighters engaged them in melee with the rest of the group backing them up, they went down pretty quickly without raising the alarm.  The group continued past the guard room down the hallway to the passage that turned to the right and started sloping down.
We descended the sloping passage cautiously to the second level for quite some time as it twisted and turned, and without a dwarf in the group, we had no idea where we were in relation to the rift and the other caves above relative to our current location.  The large cavern at the bottom was empty and eerily quiet.  This is the chamber we had visited once before while Lucias and Evelyn the assassin were invisible but there were two guards present at that time.  She had scouted it out a bit and there was a passage on the left blocked by a very large boulder that she had squirmed through into the cavern beyond.  There she felt the presence of and most definitely smelled what she was pretty sure was a large dragon in the cavern somewhere guarding its lair no doubt.  Because she was invisible she slipped back into the passage without alerting it to her presence.  So we knew what was behind the left hand passage and decided to leave it alone for now (let sleeping dragons lie says I). 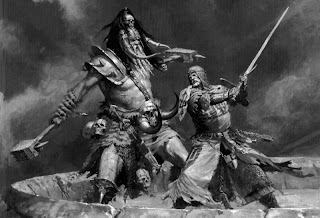 On the walls of the cavern were several intricate bas relief carvings of hunting scenes and scenes of dragons fighting monsters of all sorts.  Also, the place was lit up with caged fire beetles set into sconces on the walls giving it an eery glow, but we were glad that it was illuminated for a change.  Evelyn had also explored further into this cavern on our previous visit and found a large group of ice toads in one of the caverns beyond the end of the large entry cavern.  We knew Ice Toads were dangerous foes since one had killed one of our henchmen on a previous trip through the Pass at Hell’s Peak near Herrari (see recap Day of the Ice Toad).  So rather than disturbing the Dragon or the Ice Toads we decided to search this cavern for secret doors to see if there was a hidden entrance that we had overlooked before.  On the right hand side of the cavern, one of the adventurers found another tunnel blocked by a large boulder similar to the one on the opposite side, except that this one was cleverly hidden to look like the natural wall of the cavern rather than an entrance to a passageway.
The strong fighters, including Teth-en-Aire the Elf with his Girdle of Giant Strength, shifted the boulder out of the way and we were immediately confronted by a pair of frost giant guards at the end of a narrow but long entry foyer cavern.  They were standing near a large bell (obviously an alarm) so we sprang into action to prevent them from sounding the alarm and alerting the complex to our presence.  Apparently, we had found the entrance to the Jarl’s underground lair!  The fighters rushed the one that was heading towards the alarm while the wizards and archers hit him with magic missiles and arrows.  Meanwhile, the rest of the group that was backing them up engaged the other guard.  After a fierce but brief melee, it was over and the giants were slain before they could sound the alarm. 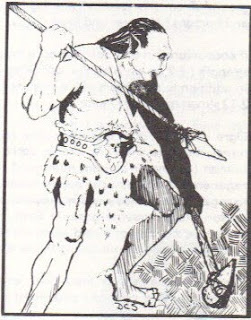 At the opposite end of this space, the cavern narrowed down into a 20’ wide cavernous passage that we cautiously entered.  On the left was a passage leading into a room and on the right were three passages and the hallway kept going straight ahead past all of the side passages.  We turned into the left hand passage and came into a large cavern full of a large group of ogres that we managed to surprise!  There were around twenty of them and we let them have it with a fireball, a lightning bolt, several magic missiles, and some arrows while the fighters went in to mop up.  It was over pretty quickly but we made a lot more noise than we wanted to with the fireball and lightning bolt – it wasn’t really planned but more of a spontaneous attack and we weren’t really trying to stay quiet.
As we turned our attention to searching the room for loot, four Frost Giant Guards showed up at each entrance (there were two entrances to the chamber that branched off of the entry corridor).  These giants started throwing rocks at us and we quickly turned our attention to them but were caught off guard by this counterattack.  When the fighters engaged the giants, it prevented the wizard and elves from being able to launch any more of the heavy firepower spells at them to take them out quickly and it quickly turned into a desperate struggle. 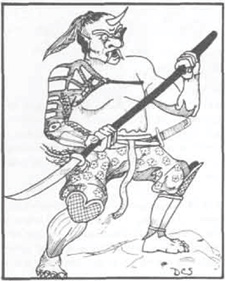 To make matters worse, two Ogre Magi appeared from being invisible behind the giants, one in each entry passage, and they both cast Cone of Cold spells on most of the group hurting us badly!  While we were reeling from this attack, we finally managed to take out a couple of the giants and the wizard and Elves killed the Ogre Magi on the right side with magic missiles and arrows before he could disappear again in the next round.  During the next round we managed to take down the last of the giants on the left side but the other Ogre Magi turned invisible and was nowhere to be seen.
Cyrcla cast Invisibility on herself and stepped out into the hallway to search for more invisible opponents – she still had a fireball left and was itching for some payback.  Meanwhile, we were badly hurt at this point and Kaira started casting curative spells on some of the wounded group members.  That’s when the other Ogre Magi turned visible again and threw a fireball at the group that was all gathered around the cleric!  Not only did she lose her spell but we got hurt even worse.  Unfortunately for the Ogre Magi though, we now knew where he was and the wizard and elves hit him with magic missiles and arrows and finally killed him. 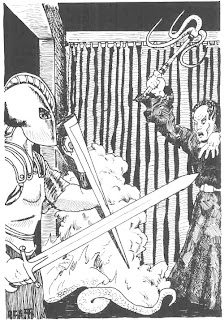 Lucias went over to his body to search it because he appeared to be their leader but then two Drow flew into the room and cast Charm Person on Lucias twice!  He made one saving throw but failed the other and started heading towards the rest of the group to slay them at the command of the evil Drow wizards!  Fortunately, Teth-en-Aire had a Dispel Magic spell on a scroll and cast it on him negating the Charm Person spell which effectively ended the combat.  Cyrcla began casting a fireball at the dreaded flying Drow but they flew out of the room and down the hallway to the larger cavern outside to escape before we could target them and she stopped casting the spell before it went off.
So once again, we managed to stir up a Hornet’s nest and got badly hurt in the process by the denizens of the complex.  The odd thing was we were coming up against creatures that you wouldn’t expect to be in the lair of a Frost Giant leader.  It was obvious that something bigger was afoot in this place, especially with the appearance of the legendary and mysterious Drow that supposedly didn’t exist.  Later on, the GM told us (speaking as our NPC ally Teth-en-Aire the Elf) that Drow didn't really exist and that the two were most likely also Ogre Magi who used their polymorph self spell like ability to change themselves into Drow in order to scare us.  So maybe they weren’t Drow after all (or were they?).  We did manage to find some treasure and a Necklace of Fireballs on the Ogre Magi leader so it wasn’t a total loss but once again, we were pretty badly chewed up from the combat.  We decided on the next foray to hit them from an unexpected direction again to keep them off guard in order to avoid slipping into a predictable pattern.  So our next raid of the Glacial Rift of the Frost Giant Jarl started off with a brainstorming session to figure out how to go about doing that.
TO BE CONTINUED…
Posted by Dan at 3:25 AM No comments: