Part I - the Voyage 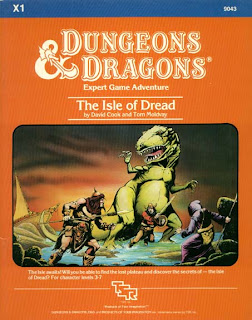 The Brotherhood of the Black Crowes had a new assignment for the group.  A map had recently been found by some adventurers and it was discovered that when heated, the location of a distant jungle island called the Isle of Dread showed up on the parchment.  There was also an account that indicated that a vast sum of riches and even a huge black pearl were hidden in a long lost City of the Gods located somewhere on the island.  We were assigned by the Brotherhood the task of finding the huge black pearl to give to the God King as a present, but were allowed to keep other treasures where found there minus 10% for the Brotherhood for arranging passage and setting up the whole expedition.  Several of our group were not used to sea travel and were ill for the first few days but eventually found there sea legs.  During the sea voyage, the ship was attacked by a very large bird of prey that killed a few sailors before the group finally managed to hit it with several magic missiles and arrows and finally, Ragnar’s sleep spell which brought it down.  Afterwards, we made it to Harbor Reach without any problems.

The group brought aboard a quantity of trade goods to trade with the locals at the island upon our arrival.  When we boarded the ship the Golden lass, we noticed that Captain Jerran Colbertis had similar ideas, as he had stashed aboard the ship a large quantity of wine to trade in the port cities along the way since otherwise, the ship would have been empty sailing from port to port which would have been a wasted opportunity to trade some goods and make some money.  So once we arrived in Harbor Reach we decided to do likewise since it was known that good wine was made in that city but not necessarily in our next port of call which was the City of .  Zarathus was another coastal city within the further to the south of Harbor Reach.  So when we finally arrived in Zarathus, the group managed to find a buyer for the wine and both the group and the Captain sold their wine to some merchants in a deal arranged in the Crippled Ape Tavern, a quiet little inn frequented by traders.  Once there, we made some inquiries as to what might be available in the islands and what they might want in trade, and used the profits from the wine sale to buy even more trade goods to trade with the natives of the island.

We sailed from Zarathus and had to outrun a violent storm by tacking along its edge but eventually made it to the Isle of Dread unharmed.  The isle was located in or near the Great Banks to the southeast if Zarathus.  When we arrived, we found the natives of the to be very friendly and eager to trade with us.  We found out that they had ample supplies of ivory, coffee beans, and a beautiful and rare type of teak wood with a bluish purple color to trade, but they really lacked raw metal ore and glazed pottery and were eager to try and set up some sort of regular trading between our peoples.  We offloaded the trade goods and they loaded up the ship with about 5,000 g.p. worth of the ivory, rare wood, and coffee beans that they could gather or had on hand which we could sell for a tidy profit once back home or on the way there.

The other thing we discovered was that the natives had a matriarchal society – the women ruled the tribes but the men were still the warriors and held positions of authority like their spokesman Augma of the Hawk Clan.  There was also a witch doctor that eyed us suspiciously but we didn't really converse with him.  The village was one of many on the main island and nearby islands, but this one in particular was located on the southern tip of the main island in order to guard a massive stone wall across a narrow peninsula of land that separated the human inhabitants on this end of the island from the many dangers further inland. 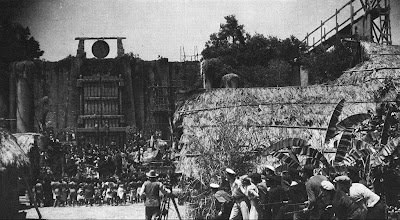 The wall looked like it was a thousand years old and the natives said it had been built by the gods.  The wall had four huge seventy foot tall by a hundred foot square towers interspersed at regular intervals along its length, and a massive gate straight out of the movie King Kong, and was built to protect against the great beasts and rampaging humanoids found further to the north of the island.  The area beyond the walls had been cleared for a ways to allow archers to keep the wandering creatures from the island from getting too close to the walls and assaulting them.  Beyond that was another line of defense which had often helped to keep the larger predators away from the walls – the tar pits.  Augma also said the villagers regularly visited the tar pits in order to collect the tar for waterproofing the thatched roofs of their huts and for other uses, but rarely ventured any further than that.  When we asked him to pinpoint the location of the City of the Gods on our map, he pointed to an area in the northeast of the island before the island narrowed down to a point further to the north and east.

Within the town itself, we noticed that there was a central pyramid and four mounds at each of the cardinal points surrounded by a circular wooden palisade.  We were told that the ancestors were buried within the mounds and that there was one such mound for each of the clans (such as the Elk clan or instance).  We asked Augma about the ancestors but he didn’t want to talk about them – he said something about bad juju.  When we asked if they had had any recent visitors from the mainland the leader said some other visitors had arrived earlier in the spring that spoke a different language and also said that they had been forced to land because their ship had been damaged in a storm.  He also told us that there were cannibals living on some of the outer islands as well and to be wary of them.  When we asked him about the City of the Gods he said that his people believed that the gods actually lived there and built the place.

Part II - the Isle of Dread 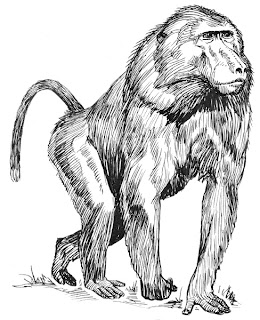 So after the trade goods had been distributed and loaded aboard the ship, we provisioned ourselves and prepared to set forth further into the island beyond the great wall.  The villagers agreed to provide us with some porters and a guide for a nominal payment and we loaded up and set forth into the teeming jungle.  About halfway to the tar pits we set up camp for the evening and shortly into the first watch there was trouble.  Lorinar and Rollo were on the first watch when the camp was attacked by a large group of Rock Baboons!  We did our best to alert the camp but they were on us before everyone could even wake up and defend ourselves.  Several of the characters were wounded and four of the six porters were rent by the savage beasts limb from limb and killed in a grisly fashion.  Lorinar somehow managed to get a sleep spell off and managed to stay unscathed in the fray, but nearly everyone else in the group was wounded by the time we managed to slay the last of them.  At this point we found out that our guide Quyoga had some healing abilities since he also helped us to treat the wounded.  We also noticed that he wasn't quite like the other natives – he was Sea Blooded! (from Realms of Crawling Chaos).

It was a fun session.  Tony rolled up a Sea Blooded fighter/cleric/shaman dude to play so we we would have a bit of healing - he turned out to be our guide which made it believable.  The first potential encounter was at night during one of the watches when a group of zombies came close to the camp - Quoyoga went into the woods and said he would take care of it and Lorinar saw him leading the zombies away!  At that point we were thinking they really were into ancestor worship because he said the "ancestors" are restless or something along those lines. 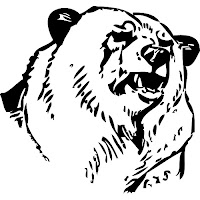 We continued our march through the hills and eventually into the jungle again and on another night, the group was nearly attacked by four gigantic bears (the biggest ones in the monster manual) so we decided to flee that encounter after Lorinar and Ragnar managed to slow them down with Stinking Cloud and Web spells.  One failed its save and was incapacitated by the cloud and the others had to go around or through the web but the spells bought us enough time to get away.  Unfortunately, our hasty withdrawal meant we lost a week or so of rations which were left behind, though that was better than becoming bear food ourselves!  These bears were huge and probably would have run us over and tore us to shreds!  So after that we kept going and entered an area of limestone hills that had caves everywhere and our guide told us not to go into the caves.  He said there was a tribe of white apes somewhere on the islands that drove the original inhabitants out but we weren't sure what was in the caves so we heeded his advice and continued on.  After that, we had another encounter during our watch with a pair of saber tooth tigers that were also huge and very hungry!  This time they were on us before we could get our stinking cloud and web spells off and it was a tough fight but we managed to slay them and only took a few wounds.

After that we kept going and eventually hit a mountain range which we decided to cross.  On the other side we came to a deep canyon (like the size of the grand canyon!) with a river way at the bottom.  We noticed that off to the left was a rope bridge across it straight out of an Indiana Jones movie or something!  So the monk cautiously crossed the bridge and made it about halfway across, but then suddenly three Pteranodon's appeared in the sky above and started diving down towards him!  This was their hunting grounds apparently and they were hungry for some monk meat!  Fortunately, monks are fast (they move 15") and he quaffed half of his invisibility potion, turned invisible and made it back to the side that the group was on before they got to him.  So the Pteradon's swooped in on the party and a fierce melee ensued.  Lorinar cast magic missile on one, the paladin, Quoyoga and Narsil killed another, then Ragnar cast sleep in the comical finale and slept another one, put the Paladin and Abscondias to sleep, but not before Abscondias got off a magic missile spell and killed the third one on the way down and then the wizard hit the ground for a dirt nap afterwards, since both spells went off in the same segment!  That was pretty funny but that's where we left it.  We can see the plateau where the City of the Gods is supposed to be located beyond the canyon and the only thing between us and it is the rope bridge and the river gorge.  It was a fun and exciting session - I have to say that this module is pretty cool!  It has a very Indiana Jones/King Kong/Rudyard Kipling story feel to it...
Posted by Dan at 1:27 AM No comments: