Averlorn Campaign - Adventure Module X1 The Lair of the Kopru

While the other characters were waiting for the four to explore the area beyond the deep water in the large room, and after the water had receded quite a bit when it drained down the stair case, they noticed that what we had previously though was a dead crab in the middle of the room was in fact a very large clam!  At this point they realized that we had most likely found the location of the fabled giant black pearl that we were sent to retrieve – it was likely to be found within the shell of the giant clam! 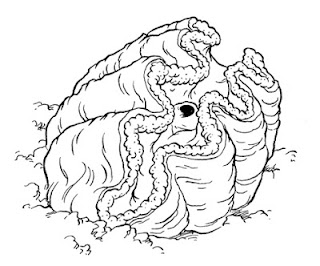 After the advance group returned to the remaining party members, and Skeorn and the barbarian showed the rest of the group how to circumvent the deep water by going down the other hallway without having to swim, the group descended the staircase beyond the second portcullis at the landing.  When we got to the bottom we noticed that it was very hot and steamy due to all of the water running down the stairs and into the heat of the room below.  We also surmised that there was some sort of natural heat source down here like lava or boiling geysers or something.  So we decided to go back up the stairs for a bit until the steam went away or diminished somewhat, and so that we could give our Monk an opportunity to attempt to extricate the giant black pearl from the maw of the giant clam…

The Giant Clam did in fact contain the fabled black pearl! After using the trademark maneuver "Monkey steals the peach" Amul the Monk snatched the giant black pearl from the giant Clam before it could snap its shell closed upon his hand!  So we succeeded in our primary task of acquiring the gift of the giant pearl for the God King!

We continued to adventure in the City of the Ancients to the lower level after camping and resting up for the night. At the bottom of the staircase leading downward, the party encountered an underground steam-geyser cavern containing large pools of boiling mud with walkways leading into it along the edges of the cavern on the left and right of the cavern walls.  As we explored the further, we found that the cavern was very hot and humid as one would expect from such an underground infernal region. Little did we know that we were being watched and stalked by a creature dwelling in the bubbling mud called a Kopru - it looked something like this with a lamprey mouth:

We found out later that the Kopru were heat loving amphibians of great intelligence and power.  This creature lurked in the pool of hot boiling mud and used its spell like abilities to dominate and charm the party! Once the submersed creature cast its spell like charm abilities upon the group, both Narseal the Sun Elf and our Thugee war priest Skeorn began to attack the party with their weapons after having been charmed by the evil creature!  Luckily they were quickly subdued by Lorinar the Wizard with the use of his Wand of Paralysis!  The party quickly tied up the two charmed characters and returned to the canoes outside and the village beyond the lake and Taboo Island.  The two tied up characters were not very happy with their incarceration but after we explained to them that it was necessary due to the evil enchantment that was placed upon them by the Kopru, they forgave us for the transgression.  When we arrived at the village, the local witch doctor dispelled the evil Voodoo Magic that was placed upon them by casting dispel magic and remove curse upon the two affected party members.  It was determined that the island was named for a reason and we decided it was best to let sleeping Kopru lie as they were a very dangerous and powerful foe to contend with. 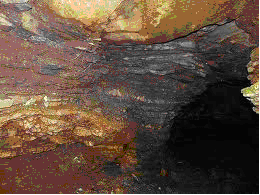 After the group rested and healed up from the ordeal, we searched the outer rim of the crater and found the trail that led out of the crater to the north that the tribesmen from Taboo Isle had told us about.  After a few encounters with pteranodons and dire wolves, we found the ravine with the vein of corbitumite that had an estimated value of 25,000 g.p. if we were able to successfully mine the corbitumite vein and ship it's contents back to the mainland!!!  We quickly realized that we could be rich if we were able to organize a mercantile mining and shipping operation from the Isle of Dread to extricate the precious fuel and transport it via in order to ship it back to the mainland so we proceeded with setting up the operation with the means at our disposal.

With the mission complete we decided to return to the mainland in order to report in to the Brotherhood of the Black Crowes and to bestow our gift of the giant black peal upon the God King in order to conclude our quest.