Averlorn Campaign: G2 A Narrow Escape and a Precipitous Ambush 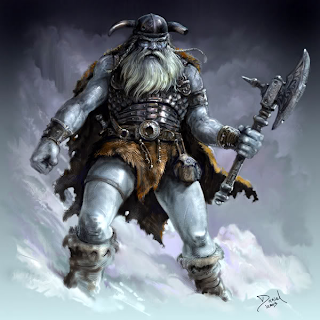 The session started off with the group in a bit of a bind.  During the previous session, after the Frost Giants in the guardroom threw rocks at the frontline fighters from the hallway and beat them up so bad, we inadvertently blundered into the Fire Giant’s lair and were almost wiped out.  Fortunately, our Elven friend Teth-en-Aire acted quickly and pretty much saved the group from a TPK (total party kill) when he cast Wall of Stone off of a scroll to seal off the Frost Giants in the hallway so we only had to contend with the three Fire Giants.  They were tough but we eventually overcame them and found ourselves trapped in their lair with only one way out of the room which was off of the ledge and into the rift beyond.  We sorted through their belongings and gathered up their loot and then contemplated our escape. 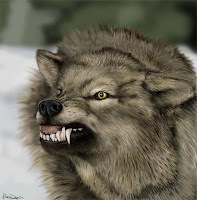 Fortunately, Asclepius had memorized the Fly spell so he decided to reconnoiter our possible routes of escape.  First, he cast Invisibility on himself and then Fly and flew over to the ledge on the opposite side of the rift and explored the caves and tunnels over there for a bit.  He found them to be occupied by many Frost Giants and some Ice Toads.  After he reported this back to the group, we decided that that was probably not such a great way to escape, since we were so beat up and out of offensive spells and healing that we really didn’t want to have to fight anything else on the way out.  He also flew over the area where we had encountered the Winter Wolves to see if we could scale down to the rift floor and escape back up onto the lower ice ledge that led upwards, but they were still there guarding the access point.  So after he flew back we discussed it for a bit and decided that the best course of action would be to have the elf ferry over the others on his back while flying to the ledge we had travelled across before on the way in.  Soon enough, the whole group was safely on the other ledge past the barracks and we travelled back through that area and out of the rift to our hideout without any further encounters or problems. 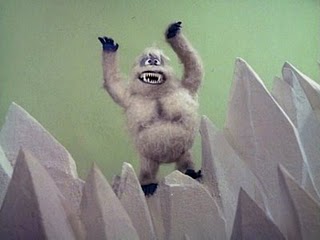 Once we were all healed up and ready for action the next day we returned to the entrance to the rift and went down the right hand path as we had done on the previous two forays.  When we went past the caves where we had previously fought the Yetis and the Snow Leopards, one of the front line fighters set off some kind of a tripwire and we knew we were about to have company.  Appearing from the direction of the opposite end of the cliff in the direction of the barracks were four frost giants who began throwing rocks at us.  We were still bound together with rope at this point to traverse the slippery ice cliffs, and the front line fighters started getting pounded with boulders so we ducked into the cave were we had previously fought the snow leopards.  This afforded some cover from the barrage and we untied ourselves from the rope, but Taleth the ranger quickly realized it wouldn’t be a great place to stay for too long because all the giants would have to do would be to move one of the large boulders they used as doors for their hallways into the entry tunnel and seal us into the cave!
So, knowing we couldn’t stay there and that we needed to find a way to fight back, Lucias, Taleth and Bellinorn made a mighty yell and sallied forth from the cave to attack the giants on the ledge.  Despite the icy conditions, they found that as long as they didn’t run and hugged the icy wall on the right that they had little danger of slipping off of the ledge and into the chasm below.  Unfortunately, as they moved forward slowly and tenuously, the giants resumed their barrage and fell back as we approached and the fighters started getting beat up pretty badly from the missiles.  What this did do however, was allow the arcane spellcasters and others a chance to get out on the ledge and fire back at our attackers with spells and arrows.  So Teth-en-Aire, Cyrcla, Asclepius and Ferris started throwing lightning bolts, fireballs and magic missiles at the giants while the others fired arrows onto the other end of the ledge at the giants which pretty much took out the first group of four giants there.  They were quickly replaced by six more coming from the direction of the barracks after the alarm had been sounded, and they resumed the barrage and kept falling back before the fighters could close with them. 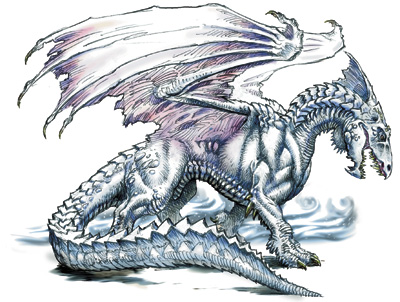 The fighters were almost dead at this point but the spellcasters and archers resumed their barrage and whittled our opponents down to two giants left standing when Kaira the cleric hit them with a nasty little surprise.  Kaira quaffed a potion of Polymorph Self and transformed herself into a small white dragon and Ferris the wizard cast his Enlarge spell on her as well and she suddenly swelled to the size of a large white dragon!  The giant beast quickly flew to the location of the last of the giants and fell on them rending them with her dragon maw and two claw attacks essentially finishing off the last of the ambushers!  Unfortunately, the fighters were hurt badly and we were pretty close to being out of healing and offensive spells again, but with the aid of our newfound dragon friend, we moved forward with the attack to press our advantage.
We went down the hallway off of the ledge past the wall of stone we had previously cast outside of the fire giant lair and towards the guardroom where we had been bombarded from so badly before by the four frost giants there.  Having learned our lesson about just sitting there and getting shelled, Lucias, Taleth and Bellinorn let out a battle cry and charged down the hallway right towards the guardroom with the white dragon leading the way!  We encountered two Frost Giants there who sounded the alarm but quickly fell under our onslaught.  We knew pressing on was probably a mistake since the alarm had been sounded and they were aware of our presence, but we wanted to do a little bit of scouting ahead to see if we could find the Jarl’s lair so we could recover the book we were sent to retrieve.  So the arcane casters cast invisibility on Lucias and Evelyn the assassin and the two scouted ahead and found a tunnel which turned sharply to the right and descended downwards!  So it appeared that we had found the way to the Jarl’s lair after three very difficult forays into the glacial rift of the frost giants!
The two cautiously followed the tunnel trying to be as quiet as possible with the assassin leading the way and moving silently.  When they got to the end of the hallway it opened up into a large chasm that was lit with cages containing fire beetles.  Standing on either side of the chasm were two frost giant guards – presumably, the other two from the guard room who had fallen back to defend their leader’s lair and sound the alarm to the rest of the complex.  So rather than stir up yet another hornet’s nest, we turned around and made our way back up the hallway to give the others the news.  Once they returned to the rest of the group, the group decided to fall back to our ice cave hideout to rest and recoup and decide what to do the next day. 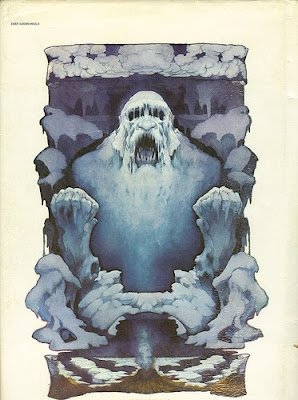 After some discussion, we decided that our best course of action was to head back to the airship drop zone and signal them to pick us up so we could fall back to Medea’s Gate to rest, resupply and purchase more healing potions which we were now out of.  It had been three days since we arrived and the Surgeons said they would send a ship for us every three days until we had been picked up.  We had enough food to continue our assault but at this point, we were so beat up after the last three forays that it would have taken several days of healing just to heal up the group’s fighters to be ready to go back in again, and we were out of healing potions.  So we decided that the best course of action would be to head back to the city to recover and come back for another assault once we were ready.  We had enough information now that we had a pretty good idea of where the Jarl’s lair was located and about some of the other dangers and defenses of the place.  We also surmised that if we gave it a rest for a little bit, that they would probably let their guard down somewhat and it might be easier to go in again undetected this time, at least initially anyway.  So we loaded up the treasure onto the airships, including the massive mammoth tusks from the Yeti’s lair,  and returned to Medea’s Gate the next day.
TO BE CONTINUED…
Posted by Dan at 9:35 PM No comments: