After several setbacks at the Maw of Torment, the adventuring group decided a change of scenery was in order.  After some discussion we decided to seek out the Wizard’s Tower of Zingalis near the headwaters of the Lady’s Finger River, a tributary of the Dormant Lady Lake to the northeast of Medea’s Gate.  We sought out the sagely wisdom of the Wizard Ornaskar the Intrepid in his tower on the outskirts of the town of Demeteros to see what additional information he could tell us about the tower of Zingalis.  We have discerned that poking around in old wizard's towers without any knowledge of the place could be a risky proposition as the original occupant could still be residing there and quite unhappy about this unless he is known to have died long ago.
So when we arrived at his tower, he offered us some wine of a fine vintage as was his custom.  It has become obvious that he is a heavy drinker as every time we met with him he appeared to be imbibing heavily.  His friend Obberon even called him "Ornaskar the thirsty" as a jest which is not far off the mark.  The first thing he said in casual conversation before we even asked him about the tower was to offer Lucias a large sum of gold for his enchanted sword Hope Blighter - over 20,000 gold pieces!  This was a very surprising offer and caught Lucias a bit off guard and immediately raised suspicions about Ornaskar's motivations and trustworthiness with information he was providing us with. 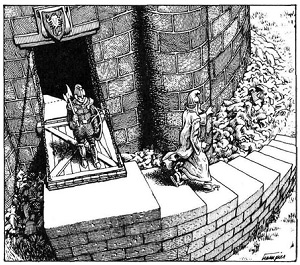 Lucias had previously approached the wizard about doing some research on the sword to see what other magical abilities might be re-activated on it if one were to find the right gem and replace the gem that was added later to it when the original gem was lost or removed (see recap entitled "Hope Blighter").  At the time, he said it was some "trivial" extra magical ability or abilities but that one would have to travel to Tarterus (where the Titans are imprisoned) to find the appropriate gem to activate it.  Once found, the gem would have to be affixed to the sword by an Elven smith of named level and the appropriate incantation would have to be recited to complete the enchantment.  At the time it seemed like an awful lot of trouble to go through to activate one or two "trivial" extra abilities so Lucias didn't think much more about it.  It now appears that Ornaskar wants the sword for himself after discovering what these potential abilities are through further research or he doesn't want Lucias to add the extra ability for some reason.  Or perhaps he wants to fix it up himself and sell it for profit.  Who knows what he wants and the motivations of wizards are always a mystery but  Lucias does not trust him anymore after this little bit of chicanery.

When asked about the "trivial abilities" that the sword could potentially re-acquire he was tight lipped about it and wouldn't divulge any more information despite the fact that he had been paid to give us this very information.  Lucias then asked him how much money he would require to tell him what the extra ability or abilities were and when he replied he named the same outrageous sum as had been mentioned before for purchasing the sword (like 22,000 g.p. or something).  It is now obvious that the group can't trust Ornaskar and his sagely advice as it appears he is putting his own interests ahead of those of the group by not being forthcoming with this information.  Wizards are notoriously competitive with other wizards and those with wizardly abilities such as Elves and this case appears to be no exception.

After this surprising and unexpected conversation, he did give us some information about the Wizard's Tower of Zingalis.  He told us that Zingalis was believed to be dead for a long time – at least 100 years or so.  He went on to say that he disappeared and was presumed dead when in his late 60’s or 70’s and was last seen by one or some of his students.  Zingalis was known to run his apprentices through a cruel and merciless gauntlet as part of their training and initiation and he was also noted for his sadistic sense of humor.  This rigorous and often deadly preparation for his student was born out of a desire for his apprentices to be of the highest capabilities and for them to be a cut above the mages of the Dominion.  He was also known to be a transmuter and creatures found within his labyrinthine halls were often a combination of several different creatures including his specially bred orcish house troops which were a more powerful breed than the common variety. 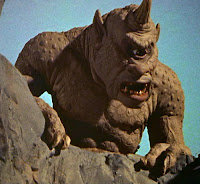 Ornaskar also said that getting into the tower was exceedingly difficult.  The defenses consisted of a circular outer wall with four entrances into the labyrinth beyond and past the wall was a dry moat with the main tower in the middle sitting upon a raised hillock.  In their younger adventuring days, Oberon Remik and Ornaskar and some others tried and failed to gain entry into the tower and things didn’t go well when they were attacked and driven off by a Wyvern.  More recently, we were told by an adventuring Monk in Medea’s Gate that there was a Cyclops that had taken up residence at the tower.
So the group bought supplies and equipment and set out to explore the mysterious wizard’s tower.  We took a boat a ways up the Lady’s Finger River to shorten the amount of overland travel required and they put us on the river bank so we could follow it to the tower without getting lost in the woods.  After traveling about four hours, the group entered an area containing a number of large stones.  Then inexplicably the stones started moving!  The group realized to our dismay that they were in fact not stones at all but nine giant stag beetles!  These things were huge and menacing but we thought we could handle them and a savage melee commenced. 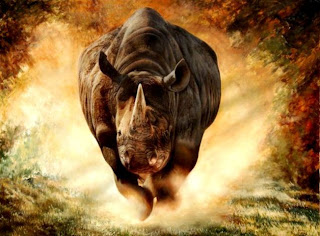 The two thieves wisely climbed trees nearby to get out of the path of the giant insects and gain sniper perches for their bows.  Rekk and Lucias braced themselves for the charge with the others behind them.  Teth-en-Aire started off the fusillade with a fireball which burned a number of them badly and the other arrows from our archers killed three of them before they got to the rest of the group.  Three of the remaining six beetles attacked the human fighter Lucias and two attacked the stout dwarf Rekk and the other one that remained went after Asclepius and Kaira standing behind the two fighters.  In the ensuing melee, Lucias, Rekk, Asclepius and Kaira were wounded badly (two shields were splintered to fend off savage blows) but the group managed to slay the giant beetles especially with the aid of the two thieves who moved in silently for backstabs at the end of the combat.
Needless to say, we were pretty badly chewed up at this point and decided to fall back to heal up, rest and re-group.  Four members of the group were hurt badly and two had lost the use of their shields so we looked for a defensible location to spend the night.
TO BE CONTINUED...
Posted by Dan at 6:10 PM