Tomb of Abysthor: The Cult of Orcus

We started off by talking to Maeve to do a little trading. We asked her if her sell sword friends could help us out with some muscle against the cultists.  Two fighters ended up joining the group. At one point Kerry asked if we should maybe go after the witch on the lower levels. They told us that they would not help us if we were to do so. We then explained that we thought she was an unseely sorcerer rather than a witch but they said that it could have been a witch's charm to make her look like an unseely sorcerer. We  also told them that she was trying to turn herself into a hag but they were vehemently opposed to going after her in her place of repose.

The newly formed group re-entered the tomb of Abysthor with the intention of assailing the cultists beyond the locked door. The Knights of the Bitter Rose had given us the key they took off of the cultist that they killed which worked to unlock the door. Brundel cast an augury spell off of a scroll before entering and asked the question "will it be good or bad for the group if we open the door". The answer from Kaz Grimmle was "both weal and woe". Upon receiving this answer we opened the door and pushed forward. 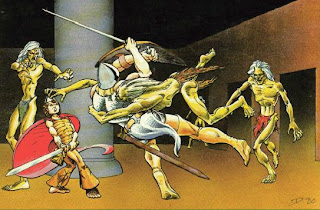 We were immediately confronted by a group of undead upon entering. Brundel managed to turn the skeletons but we had to fight the zombies which the fighters quickly dispatched. Ian began his bardic "exalt" ability by singing us on to greater deeds and Brundel cast a prayer spell off of a scroll. While the melee was going on two doors opened further down the hallway and a pair of cultists ran out and away sounding the  alarm. Holzabog thought about toasting them with a fireball but they were out of range.

At this point the fighters asked us what they should do and Ian said "after them" which turned out to be huge mistake. The fighters ran down the hallway and entered the room at the end only to come fact to face with a group of cultists. They were out of range of  Ian's exalt and quickly fell prey to the cultists hold person spells. The cultists sent more undead into the room to attack the helpless fighters while the rest of the group headed in that direction to try to rescue them. Kerry quaffed a potion of heroism and entered  the fray of the room to take on the undead.

We quickly found ourselves in a desperate situation. The room they were in filled up with four cultists and a number of undead which all but cut off our beleaguered fighter friends. The other room contained the leader and three sub commanders along with a few more undead who were holding back. Holzabog managed to cast a sleep spell and put two of the regular cultists to sleep which allowed us to pull the two held fighters out of there. As they were being retrieved they got hit a number of times by the undead facing them and the one that Brundel grabbed went unconscious. 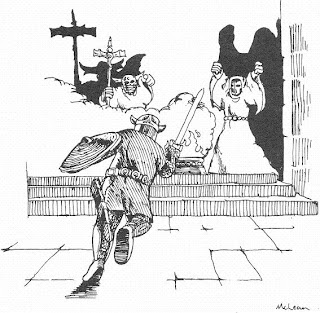 At this point the three other cultists and the rest of the undead entered the first room and it was looking pretty grim for the group. Despite the fact that we knew we would be hit by it we called out "broken arrow" to Holzabog who toasted the room with his best fireball from his necklace of fireballs. This quickly cleared the room of undead and the lower level cultists but it also singed the group still in the hallway closest to the room and killed the unconscious fighter.

Soon after that Brundel cast a silence spell on the three remaining higher level cultists to cover our exit and Holzabog threw in a smaller fireball which hurt them but didn't kill them. Brundel retrieved the body of our fallen friend to keep it from being turned into an undead creature and we beat a hasty withdrawal. Before leaving, we glimpsed three ogres (one in plate mail), around twelve more cultists and a number of undead coming back into the second room to pursue us.

On the stairs on the way out Brundel and Kerry were caught by the undead since we were slowed down from carrying the body. While Kerry engaged them Brundel managed to turn the ghouls and then the skeletons and we exited through the door and locked it behind us.

That was a brutal encounter but we did manage to kill four cultists while losing one of the sell swords. In hindsight the order to have them pursue the cultists was a mistake as it took them out of range of the bard's exalt ability which would have given them a better chance at saving against the cultist's spells. The fight was more of a rescue mission from that point on with Holzabog saving the day with the fireballs. We also prevented them from turning the sell sword into an undead creature by retrieving his body which Brundel thought was important given our recent experiences with Syng'l and Hammersmith.

Enter the Knights of the Bitter Rose...
Posted by Dan at 3:23 AM