Averlorn Campaign: The Wild and Woolly Forests of the Anvil

The carousing which took place in the City of Medea’s Gate last session was a celebration of the return of Teth-en-Aire to the land of the living through the use of powerful magic by our friends from the Fraternal Order of the Surgeons of Hecate.  Afterward, we waited for him to fully recover, did some trading, bought provisions and once again set off through the wild and woolly forests of the Anvil to return to the Wizard’s Tower and labyrinth of Zingalis the Laughing Mage.  Taleth the ranger led the way and we eventually made it to the hill region of the forest and found a suitable camp site to bed down for the night.  We set up watches as usual with the spellcasters on the first and last watch so they could learn spells the next day, and with Lucias and Kalaneikos, the fighters, taking up the second watch. 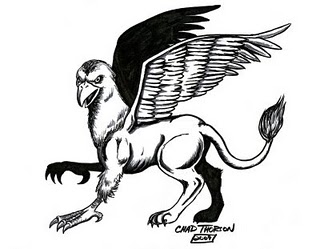 During the second watch, the camp was attacked by six Griffins!  Lucias and Kaleneikos moved to engage the giant bird like creatures and did their best to awaken the others who scrambled to arm themselves and grab their shields and what armor they could.  Aside from the two fighters, most of the group was not fully armored and were very vulnerable.  A fierce combat ensued and things were not looking good for the group due to the grievous wounds inflicted by the large beaks on the giant bird like heads of the creatures and their bird like claws.  Lucias finally managed to slay one of the creatures with his sword and both Cyrcla and Teth-en-Aire managed to cast Web spells and ensnare two of their number in the sticky magical webs produced by the spells.  The group then concentrated their sword strokes, missile fire and magic missiles on the ones that weren’t entangled and managed to dispatch them before the stuck ones could break free, and then focused their attention on those two.  At that point, it was over pretty quickly but the group was pretty badly hurt and the clerics cast what healing spells they could to help the party members recover from their wounds.
The next morning when we arose, the spellcasters learned their spells and the group decided to see if we could find the lair of the Griffins and their treasure which we thought could be nearby.  This was a difficult task for the ranger since Griffins will typically move on land and through the air leaving no tracks for anyone to follow while they are flying.  While he was circling around trying to pick up the lost trail again, we were attacked by a group of three Kech – giant white evil monkey like creatures.  We had encountered these before the first time we traveled through these woods, and they gave us a hard time then as well as this time.  They are highly intelligent and cunning opponents and set snares for the characters in front to try to trap them first when they sprang the ambush and then fell on the rear of the single file column of adventurers. 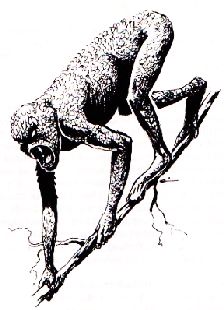 Kaleneikos and Renna were the last two in the line and were beset by the evil white monkey creatures.  Two of their number attacked Renna, the low level ranger hireling, and before the others could come to her aid, she had fallen with a grievous wound.  Lucias and Taleth quickly moved to the aid of the characters under attack after successfully avoiding the snare traps, and with the help of the rest of the group managed to kill the abhorrent evil creatures.  By the time Kaira got to Renna, she had been savagely mauled and was near death (she rolled poorly on the death and dismemberment table).  The cleric managed to save her life with a tourniquet but she had a debilitating wound that effectively ended her career as an adventurer.
This was bad news for the group indeed because we not only lost a trusted henchman, but had to turn around and return Renna to Medea’s Gate so that she could recover from her wounds.  Before leaving the scene of the gruesome combat though, the Ranger managed to find the tracks of the Kech and he led us back to their lair where we found their treasure.  We gathered up their loot and set out to return to Medea’s Gate afterward.
After some time while traveling through the woods, the ranger noticed that we were being followed by what appeared to be two or more packs of wolves but they were keeping their distance from the group for the most part.  We found a defensible location to make camp for the night but most of the players decided not to sleep because of the obvious threat, so they wouldn’t have to take their armor off.  Eventually, the wolves attacked and the group managed to slay most of their number without any problems.  Then the other group attacked and we discovered to our horror that they were not wolves at all but were actually three werewolves! 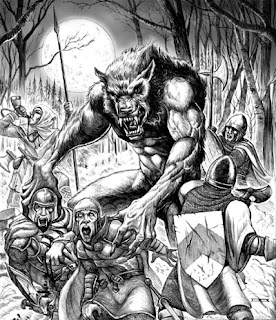 Both Teth-en-Aire and Cyrcla cast Mirror Image on themselves and there were suddenly many duplicate magical images of the two elves in the fray.  The demi humans were particularly cautious because instead of contracting lycanthropy they would have just died since only humans can contract the disease.  Subsequently, most of the elves and the dwarf opted to use their bows or magic missile spells rather than engage in hand to hand combat.  The group then engaged the werewolves and killed two of their number in a brief but fierce combat and wounded the third one badly without taking enough wounds to contract lycanthropy (none of the characters lost 50% or more of their hit points).  The third werewolf retreated and to our astonishment, the corpses of the other two slowly turned into the bodies of naked men laying on the ground before our eyes!
We surmised that the wolves and werewolves had followed the group because of Renna's recent wounds - they probably smelled the blood and were looking for an easy kill.  The ranger had no problem finding their tracks and we resolved to find their lair the next day (probably a wolves den) to see what treasure they may have been hoarding.  That’s where we ended the session.
TO BE CONTINUED…
Posted by Dan at 1:31 AM